Here’s the content of the article I wrote that was published in Astraea magazine a few years ago. Copyright Jaq White.

In this article Jaq White examines the alchemical
symbolism in the ancient phenomena of the Black Madonna.

The Cosmic Cycle and the Black Madonna
Jaq White

“Nature comprehends the visible and invisible Creatures of the Whole universe. What we call Nature especially, is the universal fire or Anima Mundi, filling the whole system of the Universe, and therefore is a Universal Agent, omnipresent, and endowed with an unerring instinct, and manifests itself in fire and Light. It is the First creature of Divine Omnipotence.” (The Golden Chain of Homer Of the Generation of things, Part I Chapter 1 – What Nature is.)

The alchemists and medieval philosophers sought to imitate Nature and the Divine, and expressed the various stages of inner transmutation that leads to enlightenment and the “Philosopher’s Stone”, known as Spiritual Alchemy, through art and symbols. In paintings and illustrations there are depictions of a snake biting its own tail in a circular symbol known as the Ouroboros. In alchemic symbolism this represents, among other things, the final unifying stage of our dual nature, and becoming one with the Divine. It is the symbol of the All, the One. Another way of demonstrating the work needed to attain this inner unity is the image of two serpents apparently devouring one another. In some, the upper serpent is winged, which signifies the Universal World Spirit – the lower serpent signifies matter, the Virgin Earth, the earthly state. The upper winged snake is the Cosmic spirit that brings everything to life, that kills everything and takes all the forms of nature. It is at the same time everything and nothing. When the two serpents are united, they are said to have “devoured one another” and the result is the Ouroboros; one single serpent, devouring its own tail, to express the continuous cycle through the aspect of time. 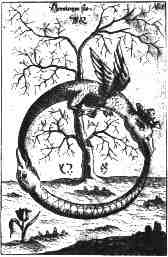 The word alchemy is thought to originate from the Ancient name for Egypt (Khem), the Black Land. The Ancient Egyptians were skilful workers in metals – there are scenes of metal-working found at Thebes and other locations, and the best known metals have identifiable hieroglyphic symbols that are defined by the determinative “of the earth/ground”. The Egyptians knew to employ quicksilver (Mercury) in the process of separating gold and silver from the native matrix, and the resulting (black) oxide was thought, allegedly, to possess powers. This black powder was identified with the underworld form of Osiris – those in the underworld are often depicted with black face and hands – and credited with similar magical properties. Alchemy is related to the black of Osiris through the connection of the black (fertile) earth, the belief that all light comes out of the dark, and all life comes out of the black; the colour black is associated with the source of creation. The alchemists were obsessed with the prima materia. They called it the black virgin, because its colour was black and it was virginal in the sense that no alchemical transmutation had been performed on the material.
2
The alchemist Nicolas Flamel wrote that the lower snake is the fixed and constant masculine element, and that the upper snake is the volatile and the black or dark woman. In alchemic terms, the first is linked with sulphur, warm and dry. The other is linked with quicksilver or the cold and moist. This employment of the quicksilver in practical metal-working has been referred to above, with regard to the Egyptians, and the same ideas are at work on the spiritual level, with the two snakes.

In what is believed to be the earliest known alchemical text – attributed to one Kleopatra of 4th Century Alexandria, there is an image of an Ouroboros with its head and upper half portrayed as black, and its tail and lower half shown as a speckled white. This correlates with the upper half or upper, winged snake as the Cosmic Spirit that takes all forms of nature, and is the volatile, black feminine aspect, while the lower half, or lower snake, can be identified with the fixed and constant masculine, the earthly state and matter.

Many well-known medieval alchemists were Christians, and some of the most beautiful illustrations involved symbolism representing well known Christian icons, such as Jesus, the Virgin Mary, the Mother Mary, and Adam. They also included Gnostic figures such as Sofia, the female aspect of the divinity, also known as Wisdom. It is pertinent at this point, to mention that in Gnostic beliefs, the Holy Spirit is female.

Many of the grand medieval cathedrals and churches in Europe keep unusual statues of the Virgin and Child – a black-skinned Mary nursing a black-skinned infant Jesus. These are known as the “Black Madonnas”, or “Black Virgins” and tend to be kept in the crypt or some other underground vault.
There are many known examples of statues and paintings of the Black Madonna, perhaps as many as 300 in France alone, and a surprising amount of the paintings and statues have an association with St. Luke, the patron Saint of painters – he is attributed with painting them whilst in the presence of the Virgin Mary, who revealed her mysteries to him during the sitting. He has also been credited with carving at least one of the statues – the wooden statue of Montserrat which, legend has it, was hidden in the Holy Grotto to hide it from the Moors. However, carbon dating suggests the statue originated in the 12th or 13th Century. Hiding the statue to keep it safe is the main reason given for these Madonnas being found in crypts and grottos. The unusual colouring of the Madonna is often explained as due to decay. There are claims that some of the statues were made from a black stone, probably obsidian, that was then given a pale skin-coloured covering to depict the recognised image of the Madonna and Child. As the pale skin colour wore off and the black base was exposed, this Madonna was then relegated to the crypt. In some churches (for example in Poland and Russia) there are iconic paintings of Mary and the Infant Jesus, also claimed to be by the hand of St. Luke, where the blackened skin has been attributed to smoke from candles, or ageing.

Comparisons have been made of the image of the Christian Madonna and Child with almost identical depictions of Isis, Goddess of Ancient Egypt, nursing her infant son, Horus. The Mother Goddess was also widely venerated by Europeans, albeit under many different guises. Nowadays, many of these goddesses are linked with Isis and, in some cases, temples in France have been attributed to Isis; for example, the town of Issoudun is so named because it is believed there was a Temple of Isis under the main hill. If so, the goddess might easily have been assimilated by Europeans into their pantheon of deities due to the similarity with Earth and Mother Goddesses such as Nertha/Nerthus. Pagan temples to Isis and other Mother/Earth Goddesses would in time be replaced by Christian churches, and images of the various Goddesses of the Earth were replaced by images of the Virgin Mary, Mother Mary, or Mary in other guises (Queen of Heaven etc.) Symbolically, caves, grottos and crypts have been associated with the womb – a cave representing the womb of Mother Earth in mythology. There are goddesses connected with the Cave-Mother symbolism, and among these Cave-Mothers we might include Mary, who gave birth in a rock-cut shelter.

Some believe that these statues of the Black Madonna are not Christian in origin; rather, they are representations of Isis and Horus that when discovered, were wrongly identified as the Virgin Mary and Infant Jesus – if so, this would certainly create the need for explanations as to why the statues were originally hidden. However, there is another possibility; the Black Madonna might never have depicted Isis but might well be an esoteric – possibly medieval – Christian symbol.

The link with medieval alchemy and esoteric or Gnostic Christianity has been demonstrated, and the use of the symbol of the Ouroboros shows an understanding of the Cosmic Cycle, as in the coupling of the above and the below, of matter and spirit in earthly man. The circular motion of the snake eating its own tail illustrates the continuity of time, and endless development.

This Cosmic Cycle is incorporated in the Christian Holy Trinity; albeit in completely masculine terms, with God as heavenly father, heavenly Holy Spirit and the divine son made of earthly matter. This was enabled through the coupling of the male Holy Spirit and the “living” Virgin Mary. In Egyptian mythology, the living Isis only conceives her son Horus after the death of Osiris. He procreates from the spiritual world, when he becomes God of the Underworld. This can be explained in alchemical terms, with the masculine Osiris, the black virginal prima materia and fixed male, uniting with the black, volatile, female, spirit of Isis his wife, conceiving and producing the Divine child Horus,
the Earthly representative of his father Osiris. The serpents have devoured one another, the Ouroboros is realised and so the Cycle continues.

The serpent has long been perceived as an enemy of Christians, and the use of serpent symbolism in Christian iconography is generally to portray sinfulness, temptation, and the fall of mankind. The serpent as a symbol of the Divine state of man would not have been acceptable, and is still not acceptable to many Christians. However, in the “Black Madonna” we have the same trinity expressed. The Black Virgin is, like Osiris, the father and the divine, male essence. The Black Mother is, like Isis, the mother and the divine, female essence, and the product of their union is the Ouroboros, Horus – the Christ.

The Black Madonna could be another representation of the All, the trinity – and an esoteric Christian symbol of the Cosmic Cycle.

This site uses Akismet to reduce spam. Learn how your comment data is processed.